I love the community I have built on Twitter over the last almost 8 years total.  My current account has less than 200 followers, but on nights like last night it really pays off…allowing for a connection that just can’t be the same when you have millions of followers.  I love them because they get to know me and I, in turn, get to know them.  So when one of them tweeted me with a link to a tweet from the official Barbie account with a note to check the Barbie with the awesome red shoes….I had to see what my friend had sent me.

She did not disappoint (as if she ever could) 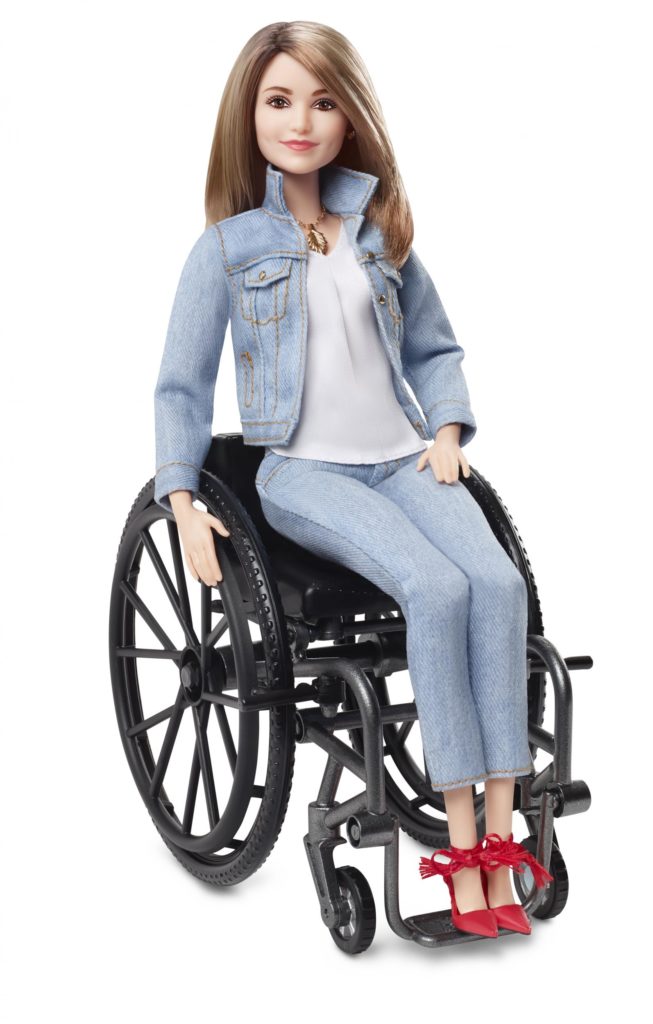 She told me to check out the “awesome red shoes” lucky for me this time there was only one Barbie rocking red footwear….though I think I could have figured out the particular one she wanted me to notice if they had all been wearing red shoes…..

I had to do a little more digging before I could bring you this post, but, it turns out that Barbie released more of the dolls that it is creating in an effort to #CloseTheDreamGap and did so with the dolls inspired by the Class of 2019 Sheroes.

The doll I had been asked to notice is inspired by German cyclist Kristina Vogel who was paralysed after a cycling accident.  I love that her chair and her posture in the chair are so realistic.  I am thinking Kristina had an awesome shoe collection pre-injury that she continues to enjoy…ROCK IT, Girl!  If I could swap the shoes for a pair of ankle booties,we’d be really close to a Barbie that is totally me.

The other Barbie that caught my eye in the picture turned out to be one based on Mariana Costa Checa.

Mariana Costa Checa is co-founder and CEO of Laboratoria, a social enterprise that gives young women from low-income backgrounds in Latin America a career in technology. She and her team are building a leading force of female tech talent from Latin America in order to turn the tech sector into a powerful source of social transformation. She is a firm believer in the idea that social entrepreneurship is the way to bring together the best of two worlds.

This site does talk about fashion that I love and I have to say that I adore the outfit for this Barbie!  Okay, I might have put her in a super cute ankle boot and not a lace up shoe but…details…

I’m telling you right now…if I can put the Mariana doll in a seated position, she is taking the chair from the Kristina doll and changing her identity to a Trisha doll…now where do I find a rolling suitcase for all of her world travel adventures???

Thanks Barbie, for making a doll I can relate to…except the shoes

« My Current Target Wants and Wishes
This SIte Proudly Supports the Work of Children’s Hospices! »